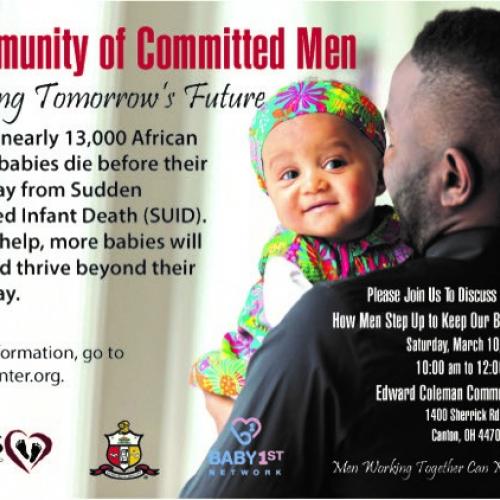 With high rates of infant deaths in Canton’s black community, the crisis is real.

To help reverse the trend, African American men must mobilize.

A forum entitled A Community of Committed Men, Protecting Tomorrow’s Future, will be held Saturday, March 10, 2018, 10:00 am to 12:00 pm at Edward Coleman Community Center, 1400 Sherrick Rd. SE, Canton, Ohio, to discuss strategies on how men can work together, and in their communities, to reduce the infant mortality rate and build awareness of the growing rate of infant deaths in the African American community. The event is sponsored by Kappa Alpha Psi Fraternity Inc., Baby 1st Network and the Global Infant Safe Sleep Center (GISS).

“We are excited that A Community of Committed Men is coming to Canton and the Stark County area. We believe this program will play a significant role in the fight against infant mortality,” said Elder Michael A. Pressley Sr., Pastor, Mt. Zion COGIC. “We're looking forward to working with those organizations that are already fighting to make a difference.  Where there is unity, there is strength.”

Men can play a significant role in reversing the trend by learning how to create a safe sleep environment for an infant and then passing that information on to another family member or neighbor. They can learn how stress can impact a mother and infant and share that information with others. Or sponsor an event or support group in their neighborhood or at a church.

“There are many ways men can make a difference,” said Pressley. “This isn’t a woman’s problem. As men, we have to share the burden and learn how to protect the little ones.”

The event will allow men in the community a chance to listen, learn, ask questions and walk away with strategies they can take back to their homes, neighbors, and communities.

“There are a lot of resources out there and we are here to help guide men in this community to teach other men how to reduce SIDS and other sleep-related causes of infant death,” said Nathaniel L. Jordan II, Community Relations Consultant for GISS and Executive Director, Fatherhood Matters Program, Columbus Kappa Foundation. “Stark County has one of the highest rates in Ohio, and we are working to offer programs that will turn this around.”

In Ohio, according to the 2015 data released by the Ohio Department of Health, a total of 1,005 infants died before their first birthday. Racial disparities persist with black infants dying at nearly three times the rate of white infants. In Ohio from 2009-2013, sleep related infant deaths accounted for 16% (836) of all infant deaths reviewed and 46% (746) for infants aged 29 days to one year. Fifty-six percent (471) of sleep-related deaths occurred in locations considered unsafe such as adult beds, on couches or on chairs. Fifty-one percent (425) of these deaths occurred to infants who were sharing a sleep surface with another person (bed sharing). As of 2016 the rates have increased to 1,024 infants dying before their first birthday, a 1.9 percent increase from 2015.

“Infant mortality is considered a basic measure of public health for countries around the world,“ said Stacy Scott, Ph.D, Executive Director for the GISS Center, who was raised in Ohio and worked in its underprivileged communities. “We must identify and get rid of the disparities that exist in infant mortality, and work to achieve equity in birth outcomes.

“There are protective measures that all caregivers can take to reduce the risk of SIDS and other sleep-related death, and we want to get that message out here in Canton and throughout the state of Ohio.”

The American Academy of Pediatrics (AAP) recommends that parents and caregivers follow these guidelines:

Our mission is to empower the world’s communities by achieving equity in infant survival. The Global Infant Safe Sleep (GISS) Center supports vulnerable and marginalized communities to reduce Sudden Unexpected Infant Death. Stacy D. Scott, PhD, founder of the GISS Center, is a 30-year public health advocate, and a safe sleep expert who’s worked from the government agency level to ground zero spearheading numerous community outreach programs nationwide to end health disparities and reduce the risk of infant deaths. The Infant mortality rate is the number of deaths of children less than one year of age per 1,000 live births and is considered a basic measure of public health for countries around the world.  In some states, the infant mortality rate continues to rise and the GISS Center wants to mobilize communities to reverse this deadly trend.

Fatherhood Matters is a program designed to address different issues related to the health and wellness of men, focusing on the welfare of communities with an emphasis being placed on fathers and the critical role they have in the family structure.

About Kappa Alpha Psi Fraternity, Inc.: Kappa Alpha Psi Fraternity, Inc. is an international organization founded on the campus of Indiana University, Bloomington, Indiana on January 5, 1911. Since its inception, it has trained over 150,000 men, particularly undergraduates, for leadership roles in their communities and the attainment of a high degree of excellence in their academic pursuits. The International Headquarters is located in Philadelphia, Pennsylvania.

The mission of the Baby 1st Network is to provide educational material and support for all who work to reduce Sudden Unexpected Infant Death (SUID).  We are committed to providing the tools necessary to empower and engage communities to keep their infants safe. We also provide compassionate support services to families who have experienced the sudden unexpected loss of an infant.